If you are planning a destination wedding in Italy, the trouble will be the embarrassment of riches but once you will come across the to-die-for typical fishing pastel-shaded villages around Sorrento and Amalfi Coast you won’t consider any other place on earth to say “I do”. In a remote part of Italy, in the land of the Sirens and Gods, perched in a dominating position or on a steep terraced hill in front of the seaside, the tiny labirynth gems as Ravello, Positano, Praiano Amalfi, Atrani and Sorrento are, boasting one of the most breathtaking natural scenery in the italian peninsula. As wedding photographer in Sorrento and Amalfi Coast, the panorama, the views the typical Italian atmosphere could enhance your day with a memorable touch. 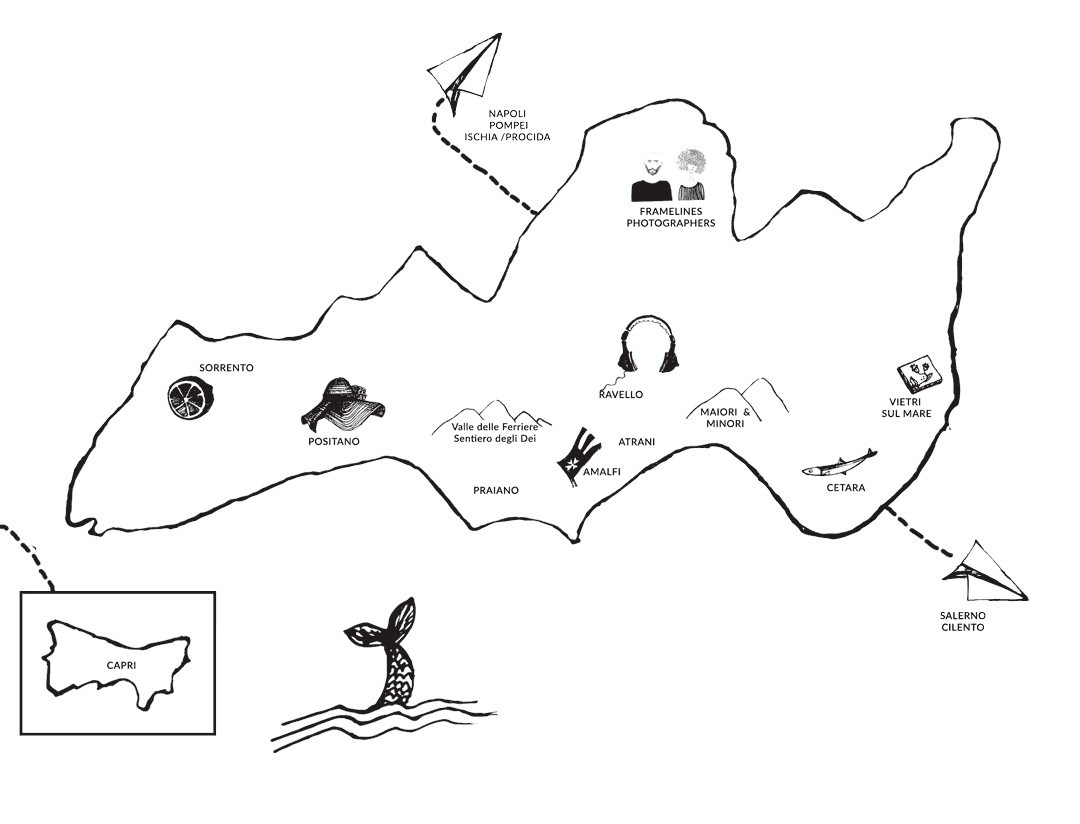 Sorrento is a civilised town with car, traffic and all the most important brand shops. However, beyond this, the city appereance preserves a lot of interesting historical places as the St Francis Cloister where you could celebrate weddings and concerts are planned all year round. The little district of Marina grande is a fishing place with little shops , fisherman’s nets and coloured houses where local people live. Take a break in the lovely bar and restaurants with fresh seafood from the morning’s catch.

Postcards from the two most classy and glamorous villages of the Amalfi Coast: Positano & Praiano. Positano, the little vertical city, has been well known over the last century for its fashion design production “Moda-Mare Positano” cool during the sixties. The art of the texils like cotton and silk was the main employment of the inhabitants. The Seaside outwear and the bikini are born in this little town and today are one of the most iconic attraction . Overlooking the coastline, you can see the little archipelago composed by three little islands that , according to legendary stories, were the siren’s houses.

The city of the Music

Sitting 315 mt atop a cliff, this gorgeous village is one of Amalfi Coast’s best-loved escapes. Named also “the city of the music” thanks to the well known summertime Ravello Festival where people from all over the world come to experience the orchestral concerts, film screenings and exhibitios settled in the magnificient outdoor venue named Villa Rufolo. Not to miss the entrance in Villa Cimbrone, the gem of Ravello that could also be the ideal location of your luxury wedding in Amalfi Coast. If you want to celebrate a civil ceremony overlooking the seaside among all the high-end hotel park, there are the Princess of Pedimonte Gardens, one of the city hall’s outdoor locations .

If you are planning an Elopement in Atrani, a wedding or a photosession in occasion of your honeymoon, solo travel, vacation, this little fishing village in the Amalfi Coast will enchant you at the first sight. Famous for being the “Elopers paradise” in Italy, Atrani is such a small village but you could plan both a religious celebration or a civil ceremony. Unspoiled by intrusive commercialization and located next to Amalfi, Atrani is the perfect place if you want to have a walk and to take an espresso relaxing in the main square. The white city inspired the dutch artist M.C.Escher who’s Italian Period Lithographs are known all over the world.

The must-visit in a lifetime

Capri is not only the luxury cafes around “the piazzetta” and the high-end hotels all around. This little island has many faces and the archeological excursions are surely an off the beaten track suggestion. The Ruins of Villa Jovis can be reached by a 45 min walk and even if the path is hard, the final scenery is worth the effort and if you want to spend the whole day there, you could make two stops on your way back, one in Parco Astarita and the other in Villa Lysis in order to discover the wild soul of the island. Far away from the touristic center, there are the “pizzolongo “ and the “migliera” path, If you want to relax on a boat tour around the Island, “the grotto” is a perfect way to enjoy half day in Capri.

On the way through the most famous cities of Amalfi Coast, there are less touristic jewels, just like Cetara. The pictoresque fishing village will surprise you with an high gastronomic experience. If you are a fan of seafood, you must taste the “colatura di alici”, the strong anchovies essence believed to be the ancient Roman “garum” the typical fermented entrail fish sauce.

Maiori and Minori boast an artistic heritage since the ancient Roman age from which their names Reghinna Major/Minor derive. If you are tireless trekkers, do not miss the sanctuary of “ Maria Santissima Avvocata” dominating all Amalfi coast with its prestigious panoramic position. The only way to get there is still by walking but the sweeping view is worth the effort to reach it.

It is an ancient Etruscan village then enlarged by the ancient Romans. It is now and it has been for many years an Unesco heritage. The village is well known among turists for the amazing ceramic manifacture shops that are real pieces of art.

WHY THOUSANDS OF COUPLE HAVE ALREADY CHOSEN AMALFI COAST AS WEDDING DESTINATION?

As wedding photographer in Sorrento and Amalfi Coast the overhelming beauty of the little terraced villages is undoubtdely one of the most fascinating in Italy. The steep cliffs diving into the blue deep sea and the typical coloured and cubic houses full with flight of steps carving into the rocks overlook the Mediterranean. A little piece of heaven for those who love being active! If you are adventorous enough, the well-marked trekking paths are a good solution to better appreciate the booming wild nature and the mediteranean scrub that includes also a wide range of fruit trees as Lemon, Cedar, Pomegranate and all sorts of vegetables.

If you get married in Sorrento , Capri and Amalfi Coast, you will immediatly notice the high density of luxury historical venues in just 55 km of coast. Both Religious and civil weddings could be celebrated everywhere around the coastline. You could choose by private city hall garden overlooking the seaside, Infinity terraces, ancient outdoor cloister and enchanting Catholic and protestant Churches. From the Luxury Cliffside hotel to the Ancient Historical Villa, to Charming and intimate boutique hotels with a spectacular view and Beachfront Restaurants. all the reception locations guarantee an high-end service .

Rule no. 1, forget about the diet! The tradition of Campania, regarding food, is one of the oldest in Italy and we could state it is the origin of Italian kitchen. This is not about a regional cuisine but about a real reign of cuisine the one of Naples where the popular habits met the aristocratic aromas resulting in something stunning. Thanks to the fertile vulcanic area, there is a high abundance of fresh healthy products. Fruits and vegetables grow everywhere, fresh cheese as “ricotta” and “mozzarella “ are handmade following the ancient traditions by the family –run diaries . The seafood is just divine . What about Pasta and the Real Pizza ?Just try!

← Previous destination "Cinque Terre and Portovenere" Next destination "Puglia" →
DO YOU WANT TO GET MARRIED IN AMALFI COAST? DROP US A LINE
We need cookies to run our site optimally, by continuing to browse you agree to our cookie policy for our required cookies.OkPrivacy policy